October 5, 2015: Today Governor Jerry Brown signed into law The End-of-Life Option Act for California (ABX 215) which was reconstituted from SB 128.   Thank you Jennifer!

What You Can Do: If you believe that everyone should have the option to make end of life decisions for him or herself, contact your state and local lawmakers today. The law won’t change unless your elected officials know that this is important to you.

Californians: Go to this link to let state lawmakers know that you support the End-of-Life Option Act for California (SB 128), currently under review. On June 4, 2015, the bill was approved by the Senate and is now the Assembly, where the deadline to pass the bill is September 11, 2015.

All U.S. Citizens: Go to thebrittanyfund.org to find the lawmakers in your state and let them know that end-of-life options are important to you. 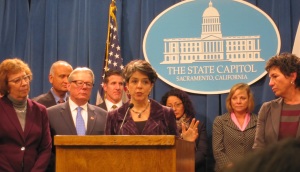 The End-of-Life Option Act for California (SB 128) was introduced on January 21, 2015, by Senators Lois Wolk and Bill Monning and Assemblymember Susan Talamantes Eggman. I spoke at the press conference and you can see the video of my comments here.

Modeled on Oregon’s Death-with-Dignity Act, the End-of-Life Option Act for California would allow terminally ill, mentally competent adults to request and receive a prescription for aid-in-dying medication they could take if their suffering becomes unbearable. Among other criteria, it requires two physicians to confirm a prognosis of six months or less to live, and to ensure that the patient has the mental competency to make health care decisions for him or herself.

Similar aid-in-dying bills have been introduced in Washington, D.C., and 15 other states.